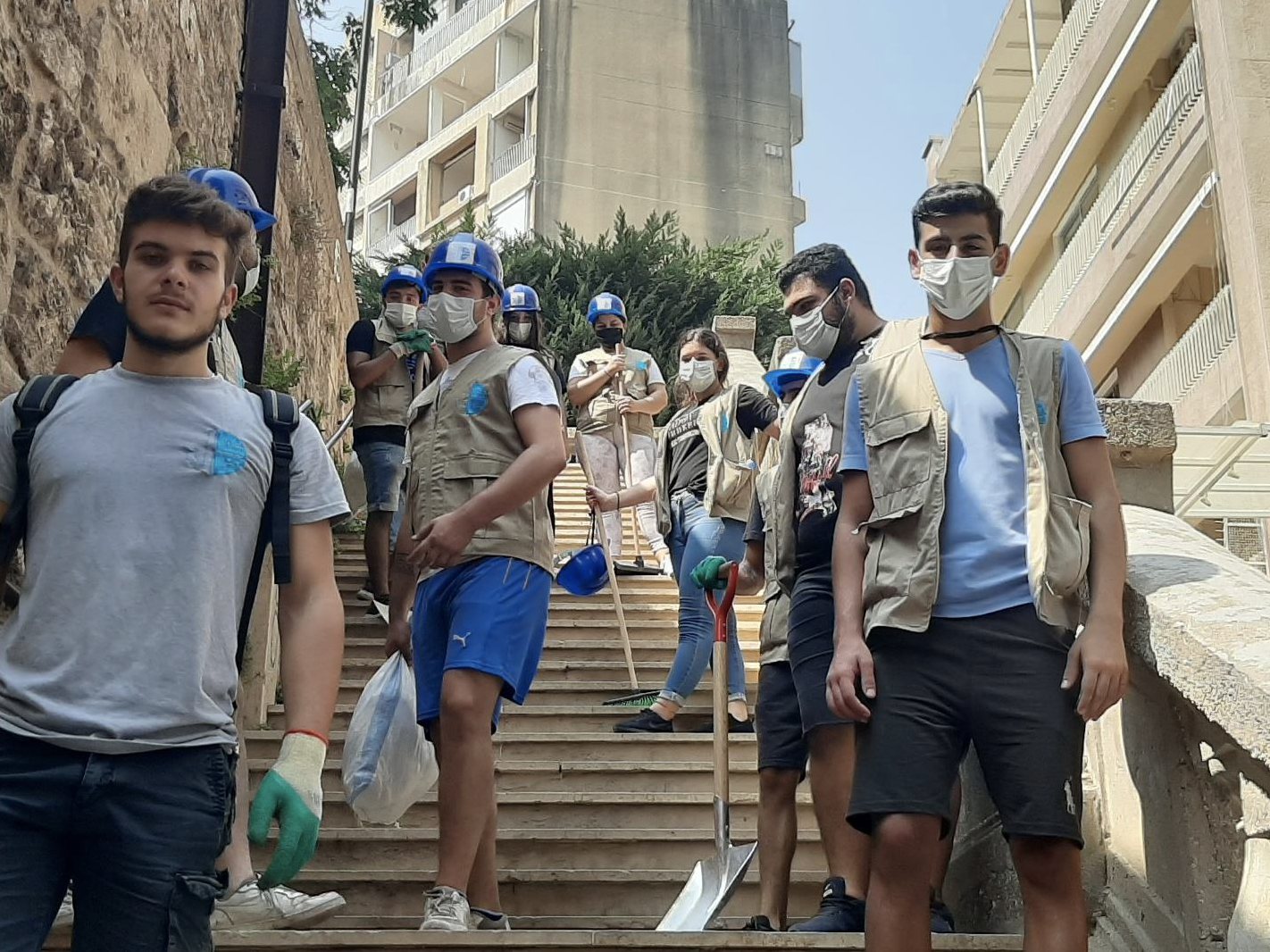 The Joint Christian Committee (JCC) teenagers were far too young to note the forlorn stand of the elderly man standing in the middle of what used to be a stunning century home with high ceilings and archaic roof - the trademarks of a charming old Lebanese house. They rushed by him, stopping only to bestow the usual Arabic greetings required, and continued energetically to the small garden behind the house where a mountain of wood debris, mostly remnants of oak doors, awaited them. The man, 90, surveyed them at first without much interest. He had nodded courteously to each “good morning amo (uncle). I hope you are doing well’, greeting and silently watched them rush to the garden. His interest suddenly peaked, he walked over to the youngsters and asked them to transport the wood into the house carefully. “Maybe we can save something,” he said. “For now, it will protect them from the rain.”

The teenagers nodded cheerfully and did as asked. Mission completed, the old man went back inside and stood exactly where the group had first seen him. His eyes wandered around and then settled on a wall. Here, markings of a growth chart were still clearly on the wall – although the concerned children must be middle-aged adults by now. But it was the only memory left in the blasted house. In a few seconds, his forefather’s home was torn apart. The beautiful archaic windows which looked out on the Mar Mikhael Street just a short distance from the city’s port were obviated. The high ceiling had fallen in, exposing a large part of the sky. The oak doors, once the pride and joy of the house, were blown into several pieces and now being carried in by the teenagers. The man continued to stare at the growth chart. The stark reality was that it would take vast amounts of money to rebuild – money he had none of and at the age of 90, had little hope of procuring any. It was pure luck that he and his wife were staying in the mountains that summer. For only a few days into their getaway, a large amount of ammonium nitrate, stored at Beirut’s port, exploded on August 4, devastating the surrounding area, killing almost 200, insuring 6,000, and damaging over 300,000 homes. In the garden, the JCC teenagers continued lifting the heavy wood pieces and carrying them indoors. The old man’s son murmured his gratitude to them. The teenagers smiled back. What more can we do for you? What more can we carry and lift? We can do it.
Another group of JCC teenagers was carrying debris in the street below. It was arduous work – a task that only the very young can do and still have the energy to run up the road to the next shambled house with equal zest whilejoking. “Hey, Rawad!” cried out Jubran Jabr, 18. “Look at your shoes. Still pristine white. Mine are dark. Ha! I guess it means I was working harder.”

Rawad Khayat, 19, stopped in his tracks to think of a retort. Finally, he grinned at his tormentor. “Well, maybe my shoes are just made better than yours!”

Laughing, the teenagers made their way to their ‘rest stop’ – a tiny destroyed restaurant in the middle of the destroyed Mar Mikhael Street. This was the JCC base. Carole Doro, 16, quickly set about distributing much-needed water bottles. It was here that the various groups met several times a day to rest, drink, eat, and take on new assignments from their JCC Youth Leader, Elias Habib. For the past few weeks, the teenagers have been sweeping glass shards, setting aside torn doors and windows, and scrubbing blood off walls and floors. Since Lebanese government officials were absent in the field, it was up to the volunteers to help the distraught victims and salvage whatever they could from the debris.

At first, the devastated area was swarming with volunteer workers. But as universities and schools began getting ready to open their doors, the volunteers had dwindled considerably.

“I think there is only us and another group or two now remaining,” said Habib. “But there is a lot of work to be done. People still need us here.” As if on cue, a woman in her mid-60s entered the base. She greeted the teenagers warmly. “Hello, Auntie Norma,” they responded, “how are you today?” Norma Irani took a seat among the teenagers. “I am well, darlings,” she responded, obviously trying to sound cheerful. “I am well.”

But suddenly, she erupted into tears. Her eyes settled on Habib, the only adult in the group. “I want my home like it was, I want my life back,” she looked at him pleadingly as her tears intensified. The teenagers lapsed into silence as they listened to their new friend. One of the teenagers handed her a tissue. Irani’s home is on Alexander Fleming Street – a quaint area known only a month ago, for its active boutique-like restaurants. Irani herself owned one of the tiny restaurants. It was her only source of income.

“I have nothing now,” she continued to cry. “My home is gone. My shop is gone. It was my only source of money. What do I do now?” When the blast hit, Irani was in her home, tending to her 96-year old father. Her two brothers were in the next room. She watched in horror as blood began to seep from her father’s forehead. Glass shards had covered them both. In an attempt to stop the profuse bleeding, she pressed on her father’s head while calling for her brothers. Were they even alive? She continued to scream but to no avail. She finally managed to guide her disoriented father to the street below, practically carrying him over rubble and glass, which now blocked her building’s staircase. Relieved to see her brothers alive and well, she ran to help the other blood-soaked neighbors descend the stairs.

The teenagers listened in subdued silence.

Finally, 17-year-old Vanessa Al Akl broke the silence. “I was there that same day,” she said quietly. “I was with my family going to Damour (south of Beirut). We had crossed the port when the explosion happened. We got out of the car. There were people everywhere covered in blood. Some people were dead. I tried to help. There was so much blood.”

Miguel, 17, looked at her. “My father was there too. He had work to do. He didn’t come home and wasn’t answering his phone. We thought he had been killed,” he said. “But he made it out somehow and came home.”

Next to him, Oliver added quietly. “That’s why I come here every day with the JCC,” he said. “I want these people to go home as well.” Another silence ensued as young and old delved in their thoughts. “I was there too,” suddenly said Mark Abu Sleiman, 19. “There were people dead in the cars. I wanted to help them. I couldn’t. That’s also why I am here now. I want to feel that I can help.” The youngsters looked at each other. “I didn’t come,” said Elie Boulos, 19, looking shamefaced. “I didn’t realize how much devastation there was. Not until we came here.” The teenagers practically grew up together at their hillside mountain Palestinian residences, known as the ‘Dbayeh camp.’ As Palestinians, their futures are bleak. Palestinians are barred from acquiring Lebanese citizenship and thus acquiring Lebanese identity cards, which would entitle them to government services, such as health and education. They are also legally barred from owning property and prohibited from working in over 60 skilled jobs. “Even if we are Palestinians,” said Jubran, “we live here. We must help.” Next to him, 17-year-old Johnny Abu Nasr, nodded. “Yeah,” he said. “And what if it happens to us next? Everyone would come to help us, wouldn’t they? That’s why we have to be here. All of us.”

By now, Irani had dried her tears and was looking tenderly at the youth group. “What would I have done without them?” she said. “These children are now my only help. The Lebanese government hasn’t even asked about me. ”Every home has been the same. Shattered glass, wood, aluminium pieces, broken furniture pieces, crumbled walls, and disturbing stories. Day after day, the JCC group put up nylon sheets across windows and balcony doors and hauled down the stairs hundreds of bags filled with debris.
Irani’s house was no exception. Still grateful, she often pops into the tiny JCC base, to check on its young volunteers.

“We kids cannot rebuild her home,” said Rudolph Habib, 16. “We don’t have money to help. All we can offer is our youth. The capability of cleaning and carrying things for all these people.