Menu
News
A Talent is Discovered in Dbayeh Camp 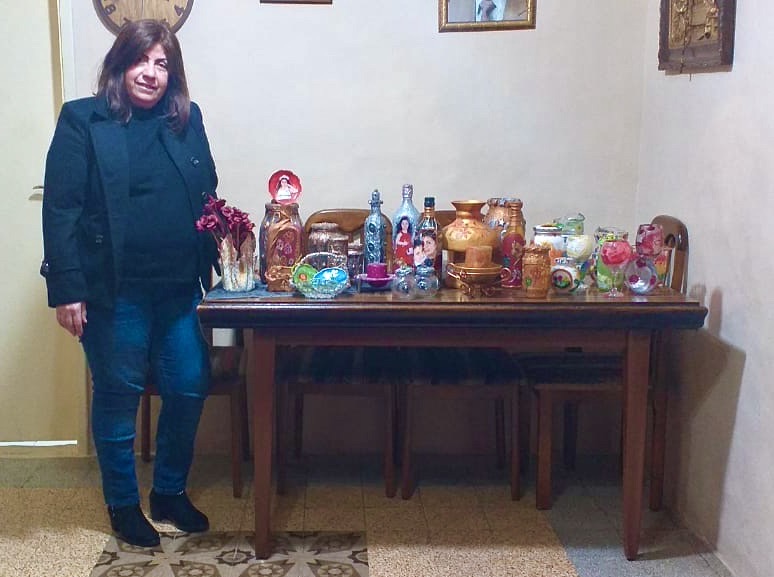 Doris Choucaire lives in the Dbayeh Palestinian refugee camp which lies 12km to the North East of Beirut. She is married and has an 11 year old daughter. Their family's difficult economic situation forced them to live with Doris' mother who was of great support to them. The young daughter had learning problems and the grandmother wasted no time in enrolling her in the school support classes of DSPR and followed up on her progress. The classes run in the lower premise of the DSPR Library/Community center which runs numerous programs that serve the community. The learning abilities of the daughter began to improve and so did her lessons. But suddenly the grandmother became sick and passed away. Doris was devastated and went into a depression as she had lost the most supportive person in her life who had helped her deal with all her problems. Nothing that her neighbors or friends said or did succeeded in getting her out of the depressed state she was in. For her, the world had stopped.

One day when her daughter was late in returning from the school support program at DSPR Jordan , Doris walked over to see the reason. And there was her daughter in the library fully and happily occupied with other children playing a game, seated around the table. Other mothers were also there waiting for their children. The librarian welcomed her warmly and all the mothers immediately gathered around her. They told her about a new program which was to start the next day and they insisted she join. Under their insistence she reluctantly agreed.

The next day saw Doris arriving at the center for the handicrafts course. At the beginning, she was tense and uncomfortable but the warmth by which she was received and surrounded slowly relaxed her. She finally felt the joy of being with people whose living circumstances were similar to her own. And as the course progressed Doris found out that she had creativity talents. She loved creating new objects and started to seek new ideas that were not costly. Soon she came up with the idea of creating artistic objects from what people discarded. She began retrieving empty bottles and cans and working on them to turn them into beautiful objects. Her house soon became an exhibition for handicrafts made from recyclable materials.

Taking this course, said Doris, helped me overcome my depression and brought out a creativity in me that I never knew I had . I now look for simple things that have no value and turn them into something valuable.

Today Doris has many friends and her neighbors look out for her. She has already participated in some art exhibitions and hopes that one day she can earn some needed income by selling her recycled items.