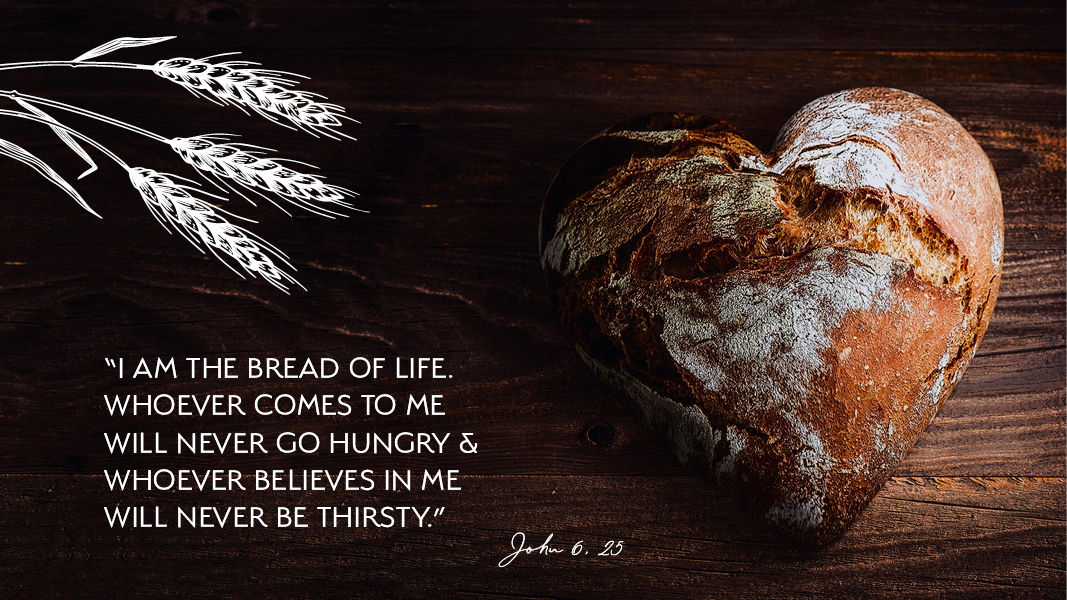 We wish you a happy new year and a healthy one. Last week, on 13 and 14 January, Orthodox Christians were the last to start their new year. A year that for some people already begins directly without bread, as is currently the case in Lebanon. Bread has always been a symbol of security and prosperity. Having enough bread - that is a basic need. If you don't have bread, you are hungry. And those who are hungry want nothing more than to have their hunger satisfied. Jesus' earthly ministry is framed in the Bible by two stories that have to do with bread. During the temptation in the desert, Jesus is asked by the devil to turn stones into bread. At the end of his earthly life, Jesus breaks bread and gives it to his disciples as eternal, imperishable food. The earthly bread becomes a sign and parable for his own being and essence. In between, at the height of his effectiveness, Jesus says at the feeding of the five thousand at the Sea of Galilee: "I am the bread of life. Whoever comes to me will never hunger again, and whoever believes in me will never thirst. John 6:35

Together with our partner organization Act for Peace Australia, we have developed a new program in Jordan called "Graduation out of Poverty". Over the next three years, this will help Syrian refugees with their livelihoods and temporary local integration. The main focus is to protect them and to show them new perspectives. We want all people in the Middle East to have bread to live on. In addition, a new center called "Olive Tree House" will be built for the poorest in eastern Amman, where Jordanians, Syrians, Iraqis and others live in extremely poor conditions. This will be realized together with the partner organization "MOSAIC for the Middle East".

In the West Bank as a whole, DSPR has secured the completion of a 13.5 km agricultural road that will benefit over 7000 farmers in seven different rural communities in Area C in the Tulkarm district in the northwest of the West Bank. In Area C, farmers have a particularly difficult time accessing their land, and this road helps immensely, boosting agricultural production in the area.

In Nazareth, special focus was given to positive youth empowerment and related youth programs; empowering girls and strengthening peace and dialogue. Bread for life is not always food for the body, but often food for the spirit as well. This is the focus in this Area of DSPR.

In Gaza, despite the impact of the Covid 19 pandemic, programs continue. Living conditions in Gaza remain extremely difficult. The collapse of the Gaza economy has resulted in approximately eighty percent of Gaza families currently dependent on humanitarian aid and a total of fifty percent of the Gaza labor force unemployed. DSPR Gaza has reached out to the population with ongoing programs and emergency assistance from ACT Appeal, 200 families with cash. A new program was also implemented with GIZ in the area of solar energy.

Lebanon is facing the worst economic crisis it has ever experienced. Poverty is on the rise as many people have lost their jobs and livelihoods. With the drastic devaluation of the Lebanese pound against the dollar and the rising prices of food and other essentials, people may soon face starvation. We continued our work with energy and zeal to overcome all the problems, although we were forced to leave the center in Sabra/Shatilla where we had been housed since 1952. Fortunately, a new space was found and we were able to open all programs in the new center, with many new students in each class. At Tyre Farm, four plastic houses were cleared of all shrubs and plants, the soil cultivated, natural fertilizer applied. Organic vegetables are now planted on the farm to provide food basics for the people. People are already eagerly waiting for it. 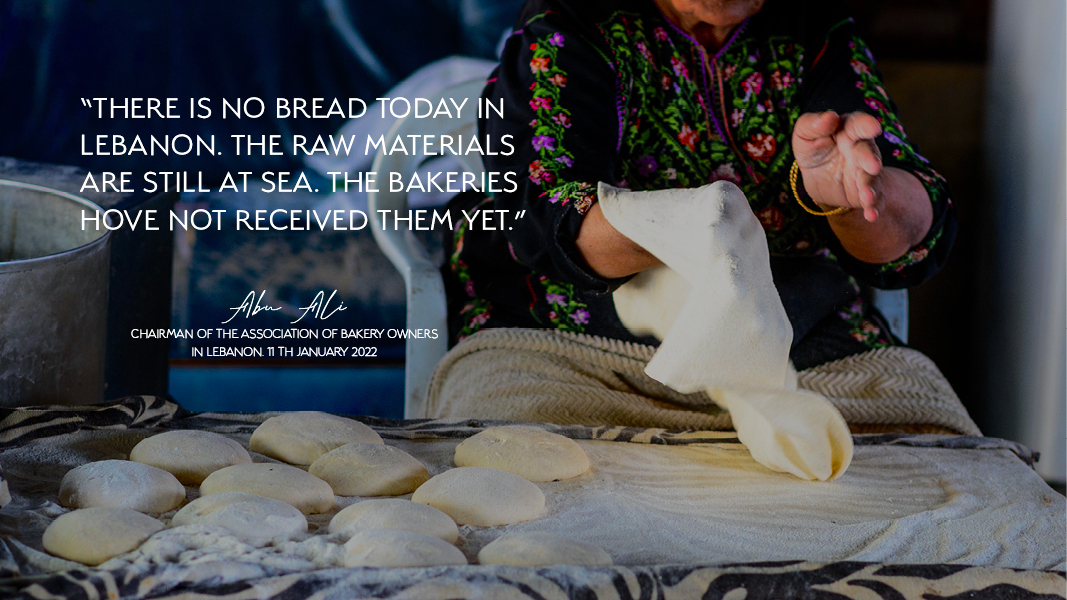 Our mother organization MECC carried out a reforestation campaign and distribution of fruitful trees as part of the global environmental campaign "Season of Creation". On Sunday 26 December 2021, a group of officials and environmental activists planted trees in Bejeh town and distributed seedlings of fruitful trees to the people to improve their harvest. The group was led by the General Secretary of the Middle East Council of Churches, Dr Michel Abs. 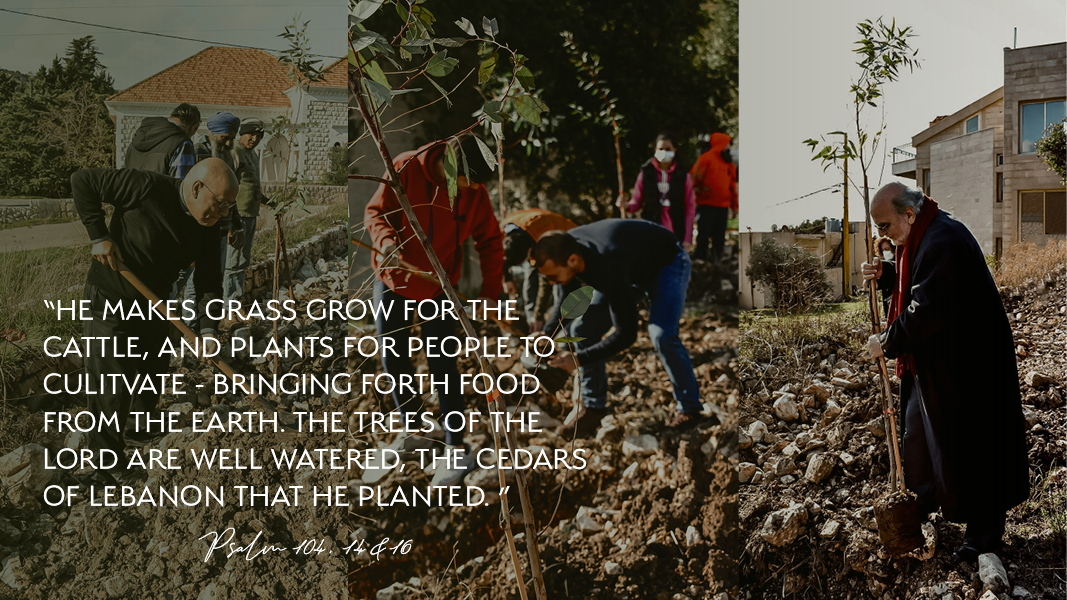 Jesus calls himself the bread of life, the heavenly bread that gives eternal life. He is what we need to live. We need him like daily bread. Bread is our basic food. In almost all cultures, bread has been baked and eaten since time immemorial. In Jerusalem, there is the famous Ka'ek AlQuds (Jerusalem Sesame Bread)), a palestine dish. The word ka’ek in Arabic means cake, it can be referred to cakes or cookies, we also use this word for ka’ek Al-Quds which is more like a bread generously covered with sesame seeds. As Palestinians our connection to Al-Quds (Jerusalem) perhaps goes deeper than just a religious one, it’s ingrained in our souls and roots. Ka’ek Al-Quds which is considered one of the city’s icons, you can find all around the City stacked on pushing carts, something that is a MUST to grab before leaving the city. Today, we wanted to bring a piece of Al-Quds right to your own home. The recipe turned to be really easy to follow, and ka’ek turned out really good, crunchy from the outside and soft from the inside. We usually enjoy it best, with olive oil and za’atar, labneh, akawi cheese, or oven-baked eggs:

Instructions:
Mix warm water with yeast and sugar. Then add flour, salt, and oil. Knead for few minutes until you get a dough.
Rub the bowl and top of the dough with some oil, cover, leave it to rise in a warm place for about an hour.
Once risen, with your hands split the dough into 5 small balls, place them on a tray with some flour so they won’t stick. Cover and let them sit for another 15 minutes.
Take each ball and roll it into a long log, then connect it from one side, aiming to make an oval long shape or any other round small shape if you prefer.
Continue to work on shaping the dough, you can let it rest for 1-2 minutes which will help in the shaping process.
Place the ka’ek once shaped in a tray over parchment paper. Then brush with milk, and cover with sesame, flip to the other side and do the same. So both sides are filled with sesame.
Cover again and let it sit for another 30 minutes. Bake for 15-20 minutes at 450 F, then broil the top for 2 minutes aiming for a golden color.

WEEK OF PRAYER FOR CHRISTIAN UNITY

This week, together with all Christians of the world, we celebrate the "Week of Prayer for Christian Unity. We pray in common and with one heart to God the Father, with the desire to empower the spirit of unity and brotherhood between us.