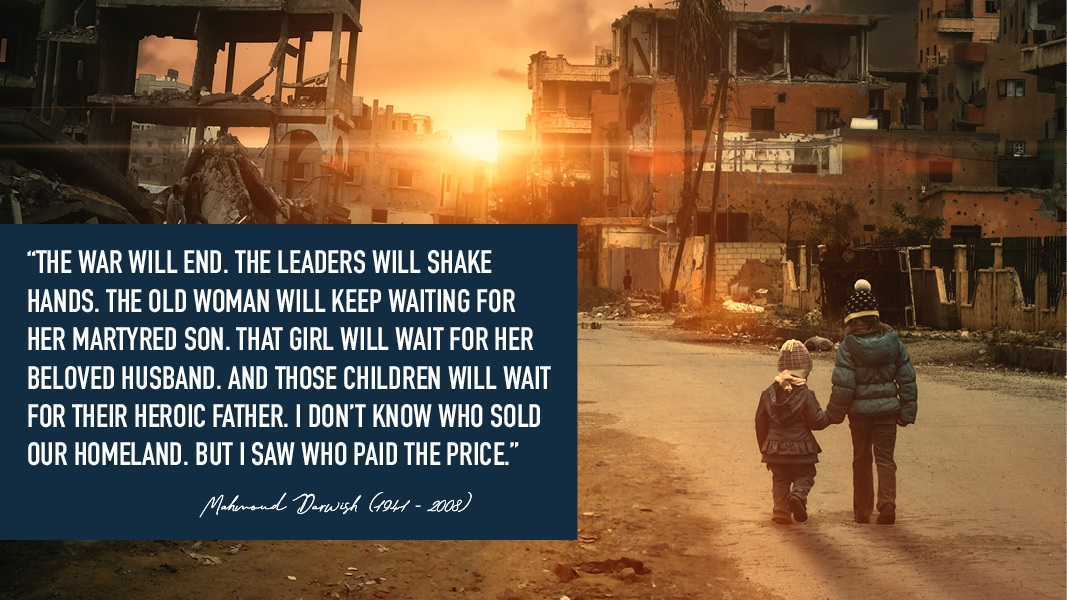 It is March, and in Jerusalem, the preparations for Easter and Ramadan are beginning to be felt. During these weeks, therefore, many Christians celebrate the season of Lent, depriving themselves of calories, consumption and comfort while nourishing the soul. In renouncing culinary and other life pleasures during the Lent season, the reminder is that we do not always know what is best for us.  Thus, this particular time also recalls the forty days and nights that Jesus spent fasting in the desert after his baptism.

The world's gaze is currently focused on the events in Ukraine. In Europe, the fear of war and nuclear disasters is palpable. Many people wonder how it can be that even in the 22nd-century, man has not learned to leave the war behind. We Palestinians also stand in solidarity with Ukraine and its people, even though  Israel plans new settlements for the many Ukrainians being hosted in the country. The Palestinian writer Mahmoud Dervish wrote several decades ago:

“The war will end. The leaders will shake hands. The older woman will keep waiting for her martyred son. That girl will wait for her beloved husband. And those children will wait for their heroic father. I don’t know who sold our homeland. But I saw who paid the price.”

Residents are slowly preparing for Ramadan in Talbieh camp, about 35 km south of Amman. It is one of the ten officially recognised Palestinian refugee camps of UNRWA in Jordan. I visited the camp with Fares Swais, Executive Director of DSPR Jordan and saw the women actively engaged with pickling vegetables. To do this, vegetables such as beet, cauliflower, potatoes and kohlrabi are pickled in vinegar along with salt, a little sugar and water and sealed in canning jars. The vegetables are thus preserved for a long time and are also nutritious.

There are several classes for women at the centre where they are guided to learn new things and then turn them into a business. The women transform old tent or canvas fabrics into high-quality bags in another class. They sew stylish bags from the upcycled fabrics, then sell at the regional market. The strong material makes the bags extremely robust. Mr Tom Whitehead supports the plastic material recycling workshop. He collects the material and produces it together with the women from the camp's environmentally safe bags. In the production kitchen, the women prepare kubbeh, cracked wheat stuffed with minced meat, and harissa, semolina based sweet; then, they sell these homemade products at the regional market in Amman. This helps secure some income for them and their families. Learning from the women, I succeeded in shaping the kubbehby hand and filling it with meat, which is not so easy; the women in the camp do this very professionally through lifelong application. The production kitchen is supported by the United Palestinian Appeal (UPA). Possibly in the following DSPR Round Table to be held in November, these women can offer a practical course of pickling and cooking to our partners to take home with them.

In the centre, Palestinian and Syrian women learn and work together. Due to the many Syrian refugees, the structure of the camp has changed. The centre is a second home for many women who feel comfortable and safe. In Talbieh Camp, there are many problems with violence. Drug use has increased enormously in recent years, and so the centre also holds educational courses about violence. During the visit to the camp, one such study was being carried out, and the room was full of women attending the classes and very interested in the topic. This sexual gender-based workshop is supported by ELCA and Act Alliance. The camp, in general, is in complex condition. Many shelters are in a bad state of repair with zinc or asbestos sheet roofs, structural problems, and poor natural light and ventilation.

In Lebanon, there are 3 hours of electricity per day. Those who do not have a generator or other means to generate electricity for the rest of the time have a tough life. In general, it is problematic to get enough water for daily needs. Due to the economic crisis, lack of financial resources and a shortage of fuel, chlorine and spare parts, a large part of the water supply has failed, or the water is no longer drinkable. Every week the water in the water tanks on the roofs must be refilled, which is not cheap.

When the JCC Center in Shatila Camp was given the notice to vacate their rooms, it was a great challenge to Sylvia Haddad, Executive Secretary of JCC Lebanon. She frantically started looking to find new adequate spaces for the various programs, as she did not want the activities to stop. A run-down house was located, renovated and made habitable with much love and patience. Now the classes of the kindergartens, the vocational training centre, where hairdressing and electrical engineering are taught, are accommodated there. The electronics classes are now housed in another building. Teenagers learn the basics of electricity, repair cell phones and much more. The Church of Sweden supports this program. The kindergarten is supported by Bread for the World.

A small playground has been installed in the backyard. A few computers and workstations were set up in a small room on the first floor. There the children are taught on the go. Children in their teens who do not go to school and learn how to handle the computer can use the Internet, get to know the programs, and have a space where they can feel a bit safe. Our partner, Embrace the Middle East supports the program "Children on the go - education of the youth" is backed by our partner, Embrace the Middle East.

The now smaller centre reflects Lebanon's increasingly difficult living conditions. Those who can leave the country are mainly higher educated people, so there is an increasing lack of skilled workers and professionals. While people in Lebanon have electricity for 3 hours a day, it is only 1 hour in the Palestinian camps. In an exchange with these families, it was clear that they all have in common the desire to return to their own country, regardless of religion or place of living. Children grow up without much education and with a strong desire to return to the land of their ancestors. "We do not belong here; our country is Palestine." Elias Zeidan, the program manager of DSPR JCC, touched base with Shatila camp families as they went around with their daily chores and with their determined engagement in the various activities facilitated by DSPR JCC Lebanon through the support of multiple partners and back donors. Hope and dignity motivate the actions in the refugee camp, even though it is one of the most disadvantaged places, like other Palestinian refugee camps in Lebanon.

MECC, headquartered in Beirut, was visited, and I had the opportunity to meet with Secretary-General Dr Michel Abs. At present, attention is focused on planning for the General Assembly of MECC slated for mid-May 2022 in Cairo, Egypt, hosted by His Holiness Pope Tawadros II of Alexandria. The staff meet regularly to plan, and all items are discussed in preparation for this event, traditionally held every four years. The General Assembly was supposed to take place in 2021, but because of Covid19, it had to be postponed. DSPR cooperates strongly with MECC; the Executive Secretary of the DSPR attends the weekly staff meetings of MECC, and there is ongoing contact between the financial and communication officers of MECC and DSPR.  The objective is the good of our work and the sustainability of the activities.

The Central Office of DSPR is located on the premises of the Lutheran Augusta Victoria Hospital, one of 6 hospitals in East Jerusalem. In the last Act-Palestine-Forum, the hospital representative Sieglinde Weinbrenner told about the current situation, which is very similar in all hospitals. In general, health care in the West Bank and Gaza is an increasing problem because they can no longer pay for necessary health treatments due to missing and decreasing funds to the Palestinian government. The Augusta Victoria Hospital specialises in cancer treatment but has not accepted new patients in recent months. Forty per cent of the patients are actually from Gaza; for many patients, the only possibility is to get treatment.

According to Sieglinde, it is the same with the European Union funds as the American ones. They are also coordinated and channelled through the Palestinian authorities. The conditions for European funds to the Palestinian Authority - on which the health sector, including hospitals, also depends - are currently being revised. There are EU conditions on the Palestinian Authority to release funds. As collateral damage, hospitals are affected, and so are the people who need treatments. Since September 2021, they can no longer spend money on new patients for chemotherapy. For each chemotherapy patient, the estimated treatment cost is about 10.000 US Dollars per month. Hospitals are reducing their services and trying to find cheaper drugs.

The world is changing. Countries have enough expenses from the pandemic. Aid budgets across the globe are generally down. Palestinian authorities are usually very dependent on foreign aid. Now add to that the war in Ukraine, and foreign countries and the European Union are focusing their attention differently. As a result, the health sector in Palestine and East Jerusalem especially is suffering a lot. And the long-term financial outlook for the Palestinian people does not look good.