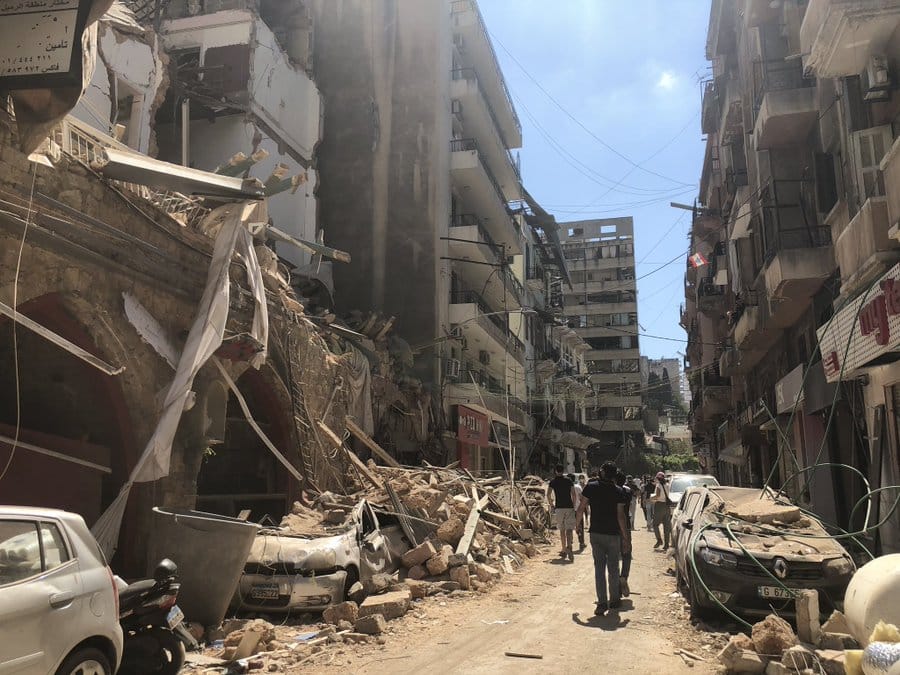 Dear Partners, Friends and Colleagues,
The massive explosion in Beirut was very hard on our colleagues and throughout the Middle East in Beirut. But above all, it hits a country that is currently experiencing a severe economic and political crisis. Lebanon has absorbed well over one million Syrians and is the scene of fierce protests against an ineffective political and governmental system. Our solidarity is with the victims! Since the end of the civil war, the Lebanese state has been focused on just one thing: to provide the various factions of the ruling class with benefit. The fact that tons of highly explosive chemicals were stored in the port, which nobody cared about, is only one of many symptoms of the „failed state“ Lebanon.

No money, no food,
no drinking water
For months now, many households have been unable to withdraw cash or even buy food. Electricity is always available only temporarily; medical care is inadequate, necessary infrastructure such as waste collection or drinking water supply often works hard or not at all. The vast explosion, therefore, leads to enormous anger among many inhabitants of Beirut. Many are calling for those responsible to finally account.

Repression instead of infrastructure
Before the outbreak of the Corona pandemic, Lebanon was the scene of revolutionary protests, with tens of thousands of mainly young people from very different backgrounds taking to the streets together, demanding the end of the ineffective system. Some of these protests lasted until shortly before the explosion.
Repression of these protests has become the norm.

Given the „failed state“, which has so far proved entirely unreformable, the people in Beirut and throughout the country currently have only one thing left to do: to organise themselves through civil society initiatives. Their work urgently needs future support and transnational solidarity - even when attention to the disaster has long since ceased.

DSPR and MECC are concerned about the recent development following the disastrous port explosion. Close to 300,000 persons, according to some sources, are now homeless. Homes, Offices and even medical facilities have fallen to the destructive effect of the blast. Lebanese are experiencing gloomy times that quickly turn into depression and other psychosocial ills.

Thank you for your prayers, for your letters of empathy and for your willingness to bond with the people of Beirut and Lebanon at this their hour of need.

Wishing all of you continued safety.
Department of Service
to Palestinian Refugees