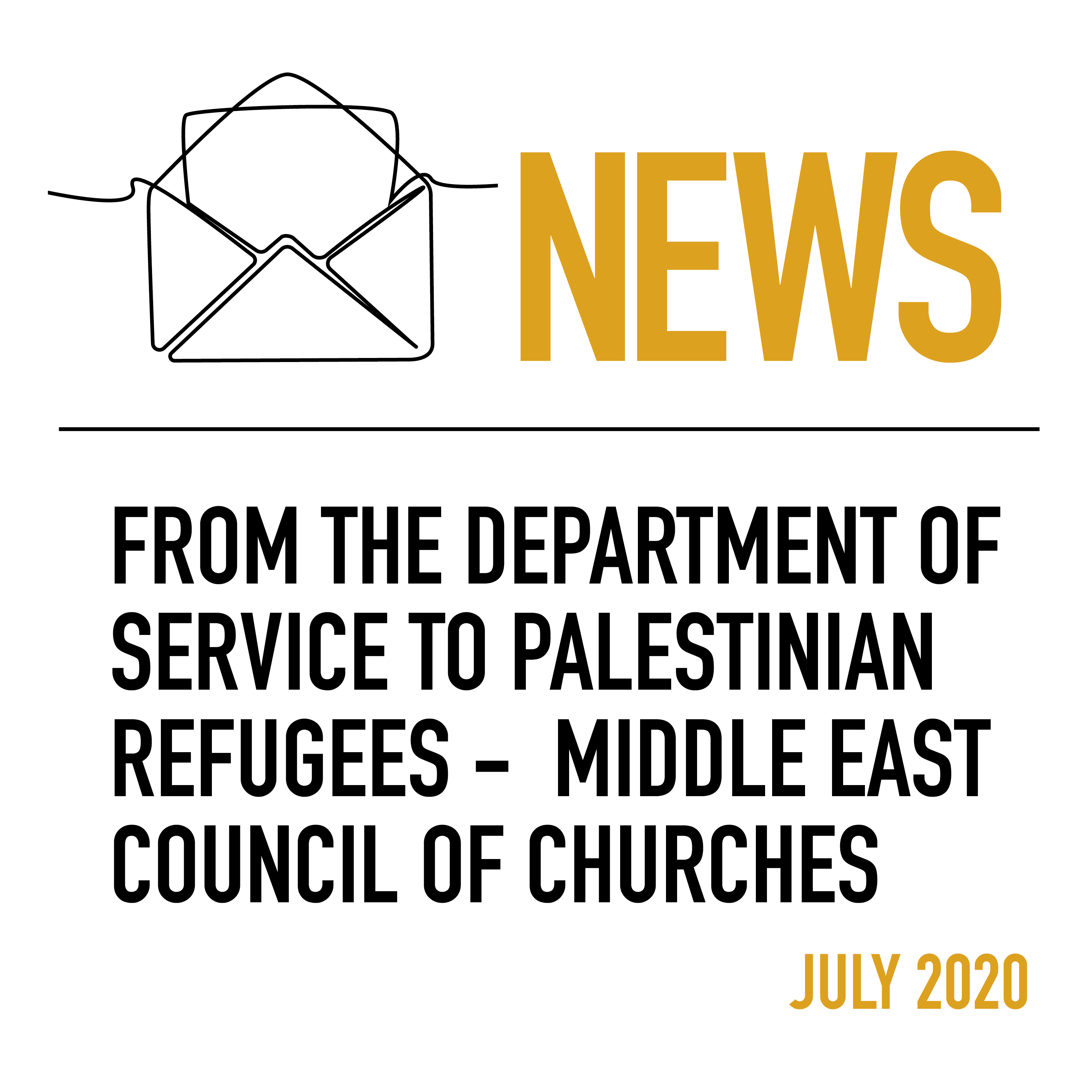 Dear Partners, Friends and Colleagues,
a remarkable increase in numbers of infected both in Palestine and Israel had dashed hopes that the first phase of Covid-19 infections was indeed behind us. DSPR Jerusalem and West Bank ICC has resumed field visits to the localities designated for the implementation of projects and activities. The Advocacy officer has also resumed her work with ICC management working to secure her access permit that would allow her to visit with the target areas. Shortly ICC will share with all the strategic approach for advocacy regarding the foreseen annexation plan. Additionally, ICC will get in touch soon via virtual means with the Round Table support group on advocacy. The effects of annexation are expected to remain with us for years to come.

DSPR Gaza NECCCRW has been cleared by the Ministry of Labor to resume its vocational training classes with safety precautions followed. In our three health clinics in the Gaza Strip, precautions especially social distancing are followed and appointments for patients are made in order to ensure the health safety of all. All of our activities and programs are on-going as we remain hopeful that Covid19 will spare us its effects given Gaza’s population density, overall chronic poverty and unemployment and with limited health capacities to cope with large scale infections.

In DSPR ICCI in the Galilee of the Nations, our work continues and we have hired a part time program manager to supervise the intergroup and interfaith work among young people. We continue with our Acre women work and are striving to full resumption of all of our programs and activities come September.

In Jordan, the government continues to exercise caution and to enforce safety precautions nation-wide which keep the rates of infection under control.
Our colleagues in Jordan DSPR NECCCRW report that the Psychosocial training workshops which reach 500 women from the refugee camps of Talbieh and Hitteen are going on with the needed social distance and health precautions. Work continues with the Multiple Options for Return to Syrian Refugees as preparatory stakeholders and beneficiaries surveys are undertaken covering the Jerash, Husn and Souf refugee camps. A Psychosocial program focusing on therapy is soon to start with Syrian refugees and host communities expected to reach to over one thousand five hundred women. DSPR Jordan is currently in the process of preparing a two-year proposal for the BRS & Fund program. The program is expected to empower potential beneficiaries, both youth and women, in developing further their business skills and to use their entrepreneurial experience to launch or re-launch their own businesses. Production kitchens for five hundred women in the Jerash refugee camp would see multiple workshops for preparing marketable food. Over three hundred families will be reached with food parcels as part of ACT emergency appeal. Over three hundred families will be reached with food parcels as part of ACT emergency appeal.
In DSPR JCC Lebanon the problem remains the financial instability of the system. Banks do not allow free withdrawals from private accounts which have rendered more of the Middle-Class Lebanese prone to poverty. Palestinian refugee camps are in no better situation as infections increase there and mean to check them remain quite limited. In particular, the official exchange rate for the Lebanese Pound of 1,500 Pounds to the US Dollar is counteracted by a market exchange rate of close to 7,000 Pounds to the Dollar. This has a tremendous negative impact on the lives of our DSPR employees and beneficiaries as they cope with more cases of the dreaded virus. JCC staff are now busy at two of our JCC centres at Dbayeh and Sabra with the process of distributing vouchers for food and hygiene essentials to the neediest families in these two camps, thanks to the generosity of our partners. Together with like-minded organizations and with our lists of neediest families we continue to coordinate relief work during this pandemic and economic crises.

Our colleague in Lebanon reports joyfully that over one hundred Syrian students are now in Damascus for their baccalaureate exams. She reports that they undertook the first exams while quarantined and once out of the quarantine UNRWA, our partner in Syria, would take care of hosting them. Forty-five children ‘graduates’ in our Sabra kindergarten would be invited back in the summer in order to prepare them for elementary school. In Dbayeh camp northeast of Beirut, we face a particular problem as the private school where some of our students went is closing down due to the financial situation and the inability of parents to pay the dues. Apparently the financial situation is more worrisome than the effects of the coronavirus in Lebanon.

Of particular concern is the effect of the political situation with the looming annexation on the health of the chronically ill in the Gaza Strip. In order for them to exit Gaza, they need to have clearance through coordination between the Palestinian Authority and the Israeli liaison offices. Due to the decision of the Palestinian National Authority to cease all coordination with the Israeli authorities, exit permits from the Gaza Strip for the chronically ill had become almost impossible to secure. I refer you to the following link by WHO that covers this concerning issue: http://www.emro.who.int/pse/palestine-infocus/patients-in-the-gaza-strip-unable-to-obtain-israeli-issued-permits-to-access-the-healthcare.html

Apparently the policy of ‘coexisting’ with Covid19 infections has been adopted by all governments and health ministries of the region. This policy translates into very localized lockdowns on nuclei of infections in neighbourhoods. Safety precautions such as wearing of masks, social distance and hygiene have been enforced and it is hoped that these measures would stem the tide of rising infections. Unfortunately ‘coexisting’ with Covid19 is misunderstood by some as if the virus is behind us which results in carelessness in enforcing personal precautions with dire infection results. Particularly during the summer ‘wedding’ season throughout the region, the concern for more infections is quite serious.

March to May 2020 saw a complete lockdown in the different geographic areas, with the exception of Gaza, where DSPR operates. Our staff members could not reach their offices and the best approach to deal with this situation was to send them home. DSPR Central Office and ICC Jerusalem and West Bank Staff had the option to go on unpaid leave with the National Insurance Institute paying fifty or sixty per cent of their salaries and DSPR covering the rest of the salaries. This was applied to all Central Office staff with the exception of myself because I continued to work full time from home. A question was raised by some partners on the status of our employees and staff members, including our Advocacy officer of DSPR who was appointed in late October 2019 and who is under the employ of DSPR Jerusalem and West Bank(ICC). For our Central Office staff, the unpaid leave meant that they were not required to do any work from the office and not from home. There were, however, times when they chose to respond to email messages, or as in the case of our Finance Manager to even venture into the office for auditing purposes. Communication with Central Office staff, including our Communication Officer in Berlin, continued in order to come up with updates and for other urgent matters such as the preparation of the drafts of the 2019 Annual Report or presentations to the zoom CC meeting held on May 13 and 14, 2020. On the Advocacy officer, it is my understanding that because of the inability to deliver due to the lockdown, it was the decision of ICC Jerusalem and West Bank management to give her an unpaid leave for two months starting mid-March. There were also problems of access as she holds a West Bank ID. All permits to access Jerusalem or the Gaza Strip for West Bank ID holders were cancelled. Only on the 31st of May 2020 did the Israeli authorities resume the acceptance of access applications from NGOs. On the 1st of May and because of the problem of inaccessibility the Executive Director of ICC Jerusalem and West Bank gave the Advocacy Officer notification of termination of her part-time employ.

Nevertheless, once the prospects for accessibility resumed, she has an access permit for three months, the advocacy officer was welcomed back to the DSPR ICC Jerusalem and West Bank offices to go on with advocacy work.

My understanding is that she is at present working on an advocacy plan to deal with the impending annexation of Palestinian territories by Israel. Also, it is expected that soon there will be a virtual meeting with the support Partners’ Advocacy Group.

I am hoping that the results of the advocacy work will be shared soon with all of you. Because there was a question on the Advocacy Officer’s salary, I would like to mention that her salary comes from the General Budget of DSPR. We have allocated US$25,000 for the purpose and with a small calculation what is left from this budget will suffice for only six months to come. We need to raise the salary for this position in order to go on with DSPR advocacy.

Much work needs to be done. In the Core Group meeting of May 12th the Minutes of which I have shared with you, it was the recommendation of partners that any change in the bilateral agreements due to Covid19 situation should be discussed between us and the relevant partners. On the administrative and staff situation within DSPR and its various Areas, I have shared in the past some overall developments with respect to our working environment but did not go in details with specific Areas, Positions or with Central Office. Partners believe that this is important to share as well and accordingly attention to details will be forthcoming with the expectation that specific partners who have particular questions or concerns with respect to details to contact me with their queries and concerns.

Wishing all of you continued safety
Dr Bernard Sabella