Menu
News
Happy March Month from Our Women to Yours 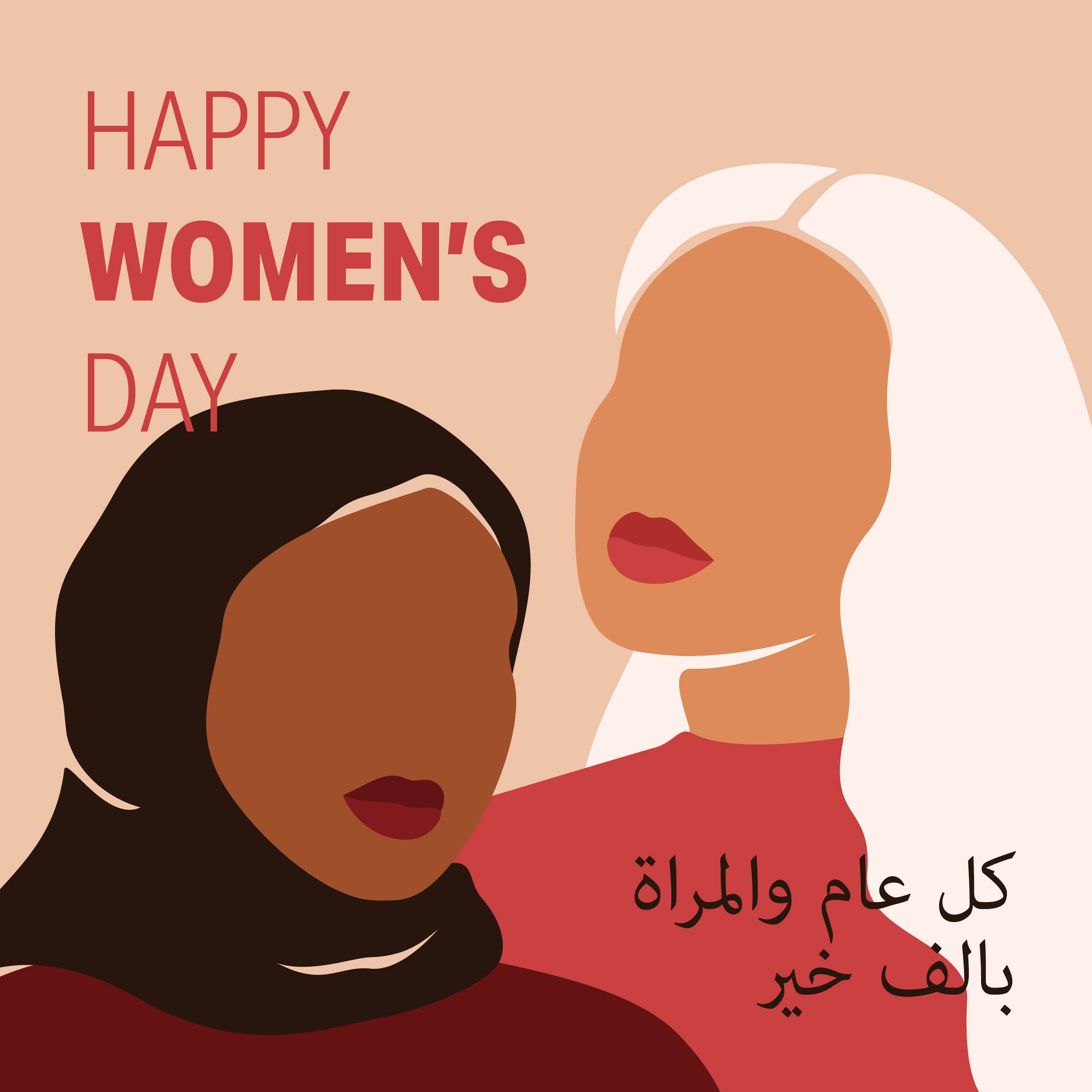 Dear Partner, Supporter and Friend of DSPR/MECC,
March is the month where Spring reminds all of us of resurrection and hope. Days of Winter, which could also inspire warm reflections, are replaced by Days of Spring where flowers bloom, trees blossom and wildlife springs back to life reminding us of resurrection and hope. March is indeed an inspiringly hopeful month, particularly this year, as we continue to experience the vicissitudes of Covid-19 and its impact on our life and that of our communities and societies. The hope that the month of March brings is best exemplified by two "women's events" International Women's Day on March 8th and Mother's Day on March 21st. Mother's Day is also celebrated elsewhere during this month but in Palestine and throughout the Middle East, the celebration on March 21st is intentional as Mothers symbolize to many of us the Spring of our lives and the hope and sustenance that they give us as we go through the sweet and sour of life. The examples of Khawla, Leila and Eman shared in this story attest to the hope and sustenance that mothers and women in Palestine, as elsewhere, bring to our lives. DSPR/MECC is proud to have contributed to the success of these wonderful women.

March also sets the tune for the Easter to come, the belief and commemoration of the Resurrection of our Lord and the hope that it gives us and the world for better things to come and for the promise of an abundant life.

All in the Department of Service to Palestinian Refugees of the Middle East Council of Churches wish all of you Happy March that women can overcome all the obstacles and constraints placed on them because of their gender. May all of our months be like the month of March.

Khawla Abu Muhsen, (53) years Palestinian woman living in Ruseifah, East of Amman with one boy and four girls, lost her husband in 2009, which added a very heavy burden on her shoulders, where she had to raise five children on her own. Her education did not surpass high school which meant very limited opportunities of finding a proper job to earn enough to support her family. In 2010, she heard that DSPR/Jordan is providing its services at Hitteen Refugee camp, close to where she lives with her children, through a women's voluntary committee that supports the work of DSPR inside the camp. As a volunteer, Khawla had the opportunity to join many of DSPR activities. By time she showed leadership qualities which enabled her to go on and conduct activities herself with some remuneration for her time and efforts. Khawla participated in workshops and training courses that taught her several skills such as sewing, crochet, soap manufacturing, candles manufacturing, and confectionary.

Through this learning opportunity, she managed to establish small business in the industry of crochet and started participating in different bazaars. With the income she was earning, she bought different items to produce cosmetics, accessories. She sold them at competitive prices in her community contributing as well to solidarity within the community.

To develop her business, she had the chance to receive a loan from DSPR/Jordan that allowed her to upgrade her business to new lines of products for wedding occasions, new born babies’ items of crochet, winter clothing items such as caps and scarfs.

With her determination and success, one of her daughters was enabled to study for a diploma in fashion design, another daughter is currently studying nursing, while two other children are in high school. "The opportunity that DSPR gave me, allowed me to be strongly involved in voluntary work in Jordan, not only in Ruseifah but also in other geographic areas all over Jordan," so concludes Khawla with a broad smile on her face.


Leila Basheer, a 46-year-old mother of five, lives in a village In the north western part of the West Bank within the boundaries of Qalqilya Governorate in Palestine. Although her husband was a day laborer at an adjacent Israeli settlement, his health conditions with high blood pressure and diabetes made his working possibilities quite precarious and of an unstable nature.

Leila's family continues to be challenged by the poor economic conditions besides having a daughter suffering from hearing impairment. Kharoub Paste can be preserved and bits of it are used to make a drink that carries some medicinal qualities particularly for an upset stomach. the Carob drink is popular with Palestinians on hot dry days when ice is added to it. Since her childhood Leila was keen on pressing the Kharoub herb into a paste and to preserve it for future use in her family. As she grappled with her own family's trials and tribulations Leila started thinking of Kharoub paste as a source of income. The process of making the Kharoub paste needs high efforts of collecting, grinding, and cooking. These efforts are now wanting by many in the community as 'modern life' imposes its own demands and requirements. Four years ago she sets herself the task of launching her Kharoub Paste project which proved to be a turning point in her life and that of her family. In her own words, Leila describes her project:

“In the beginning I started making Kharoub paste and selling it to my close neighbors. As I made some profit from local sales, I decided to expand sales to surrounding villages. DSPR/ICC Jerusalem and West Bank helped me out with buying a grinding equipment that facilitated making Carob paste enormously. I am pleased to say that I can now produce high quality paste. The grinding equipment also helped me increase my Income by 40%. I look forward to buying a second grinding machine, this time to produce tomato paste. I am in for the business, so concludes Leila, with a broad smile."

On a historical note about the Carob tree, It is said that the pods of the Carob tree sustained John the Baptist while he was praying in the desert. Hence Is also known as St. John's bread.

Eman Abu Al-Aish is a young married woman in her late 20s and has one child. She lives in Jabalia Refugee Camp in the Gaza Strip in a 25-square meter room together with her husband, who has many health problems, and their only daughter,

Since she got married, she has been trying to support her family. To do so, she used to seek charity aid from various sources, including the United Nations Refugee and Works Agency (UNRWA) set up by the UN back in the 1950's to aid Palestinian refugees who were displaced from their homes in Palestine as a result of the 1948 Arab-Israeli war and the creation of Israel. She learned about DSPR/NECC Gaza's course for dressmaking and tailoring. She was insistent in joining it despite the problem of finding the cash money for daily transportation from her home to the Training Center at DSPR/NECC Gaza. "I couldn't sleep many nights because I didn't have money for transportation for the next day," Eman says.

Eman always woke up early, left her young daughter with one of her daughters-in-law, and was among the first trainees to arrive at the Center every day. She was an excellent student and very hardworking while constantly thinking about her daughter back at home in the Refugee Camp. When she graduated, she was perfect in tailoring, so she worked in a sewing workshop in the refugee camp at a low wage. "I was dreaming of having my own workshop filled with scraps and threads of dresses and clothes" Eman says.

She continued to work and did not stop for a day, and when she got sick, she had to go to work so that she could provide food and care for her only child.

Eman was recommended by DSPR/NECC Gaza to go on and receive several training courses of how to manage small projects financially and managerially. As a result of her achievements, Eman was offered temporary work for six months during which she learned more on the skills and challenges of dressmaking and tailoring.

After completing the training, Eman proposed a plan for a small project, a sewing workshop of her own. The project supervisors studied the plan and selection interviews were conducted for the applicants. "After I left the project evaluation interviews, I felt my dream was getting very close," says Eman.

The project was approved and funded with the rental of the workshop, equipment, furniture and some raw materials. Eman's dream of having a workshop became true, and her husband is now working with her at the same workshop. The family situation improved and this was reflected positively on her small child.

Eman says, "Do not despair, persevere and trust yourselves, every hardworking has its reward." She added, "My dream became true and I will work hard until I afford buying a small apartment for me, my husband and my little child".