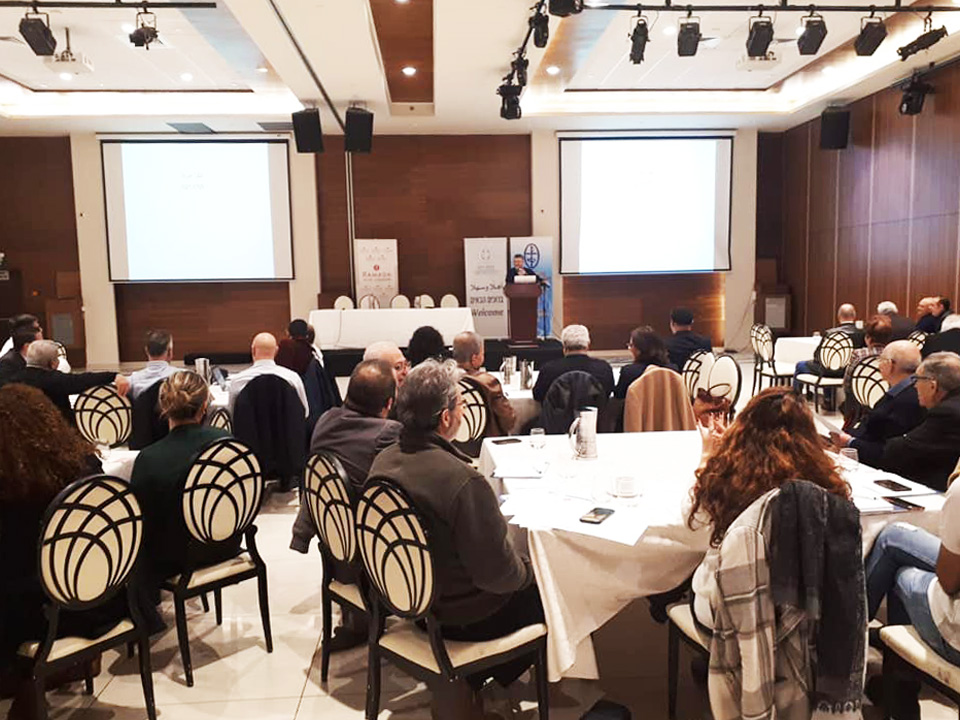 On February 21, the International Christian Committee in Israel ICCI, together with the Nazareth Hospital EMMS, held a conference on the health system in the face of economic and political challenges, with the aim of better promoting the health of the Arab society in Israel. The seminar, held at the Ramada Hotel in Nazareth, was a great success, it was a good conference day with presentations from the expert lecturers in the field of economics and health.

The conference, chaired by the ICCI Executive Director, Mr. Hussam Elias, opened with briefings to Mr. Farah Geraisy, Chairperson of ICCI, and Professor Fahd Hakim, Director of the Nazareth Hospital EMMS. Father Frank of the Anglican Church gave the blessing and Canon Abu Rahmon translated the blessings and emphasized that every human being is equal. Mr. Farah Geraisy, gave a brief insight into the work of the ICCI as part of the DSPR, which started in 1948 with the Palestinian refugees and is now present in five territories, the West Bank, Jordan, Gaza, Lebanon. Its main tasks are of student loans and work on interreligious and intergroup relations. The director of the Nazareth Hospital EMMS, Professor Fahd Hakim, spoke about bridging the gaps and his vision for the future, highlighting the current work of the hospital and its role in medical and therapeutic work. The vision of the hospital is medical care as a legal duty and right for every human being.

The seminar day focused on health policy with special attention to health inequalities in relation to Arab society, which was mentioned by Dr. Nihaya Dawood from Ben Gurion University in the Negev. She presented the history of the Israeli health system from the foundation of the state until today and also the health policies towards the Arab society and inequality in health. “Health is a human right according to international conventions, related to other basic rights.” The Public Health Act was passed in 1951 and since then there have been two separate Ministries of Health. One for the Jews and one for the Arabs, integrated into the military government. In 1994, according to Dr. Dawood, the Knesset passed the law for universal health in Israel. There are still large qualitative and geographical gaps in the health services provided and an insufficient budget. Also, only 15 percent of all doctors in Israel are Arab and no more than 8 percent of all specialists are Arab. As far as mental health is concerned, there is a shortage of services in the Arab sector that is growing steadily. Only 2 percent of all Psychiatrists in Israel are Arab. In the Arab society is a high rate of illness, especially cancer, heart disease and diabetes.

Knesset member Dr. Yousef Jabareen presented the right to health and equality in health care. In his speech he focused on the importance of extending health services to all rural areas. There is now the Problem of Arab Israeli students, estimated at 10,000 +, who receive their medical and nursing degrees beside physiotherapy and occupational rehabilitations from Palestinian universities without responsibility and follow up by an independent medical board.

The issue of gaps in the economy and health was discussed by the auditor Mr. Waseem Dibbini, CFO and Deputy CEO of EMMS, in which he highlighted the financial situation and the distribution of budgets among the country's medical facilities. There is a gap in average income between an Israeli household and an Arab household in Israel. The conference ended with a panel discussion on the role of health funds in bridging gaps, moderated by the journalist Mr. Jackie Khoury from Sun Radio and the Haaretz newspaper, the deputy director at Clalit Heath Service Dr. Awni Yousef, the Director at Maccabi Health Service Dr. Hanna Khoury, the Director at Meuhedet and Dr. Bechara Elias from Haifa.