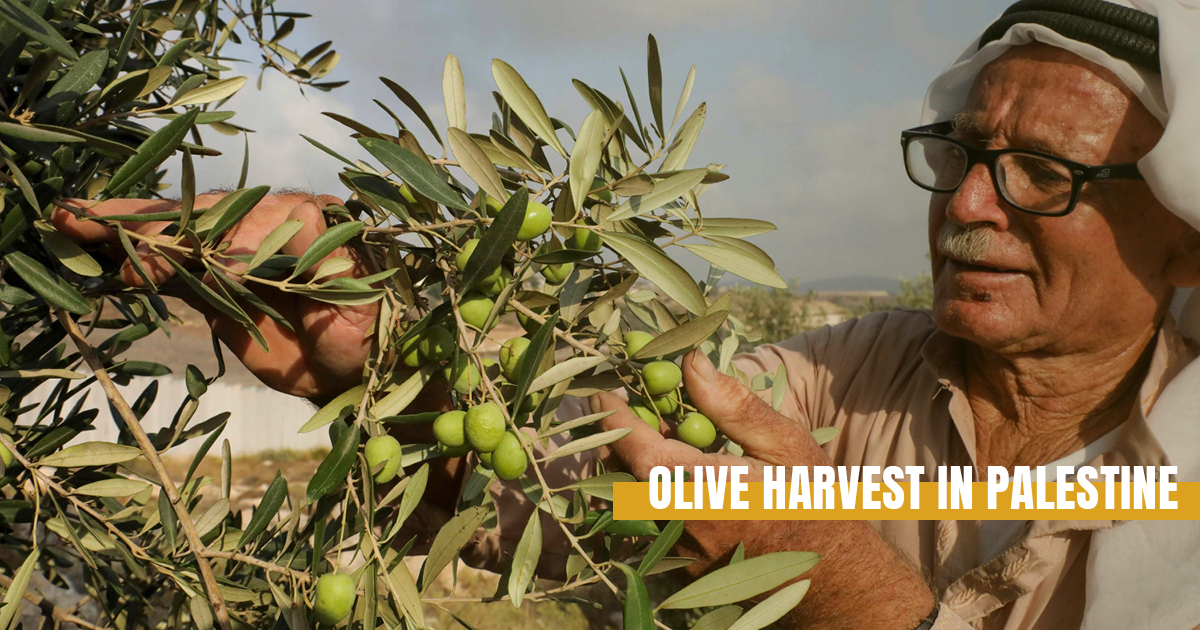 Palestine and Olives - two words - indispensably linked. Both are deeply rooted in their land. Every year in October and November, Palestinian families gather in the villages by the olive groves to pick the olives. After the first rains, the olive harvest begins in Palestine. This is a sign that the olives are ripe and ready for picking. While collecting and pressing the olives, people eat their meals outside, which are quickly prepared over the fire to waste as little time as possible on other things. Traditional songs are sung that are passed down through generations.

Olive trees and their harvest are an essential part of Palestinian culture, indeed part of the national identity. A relic of thousands of years of tradition in this area. Some 80,000 to 100,000 Palestinian families depend on the olive harvest for their income - including more than 15 per cent of working women.

During this particular time each year, the 800 or thereabouts olive trees on the slopes around DSPR's Central Office on the Mount of Olives are harvested and about 2 tonnes of olives are picked to be pressed into olive oil in the olive presses at Latrun Monastery. An estimated 10 million olive trees are grown in the West Bank and Gaza Strip. Olive culture in Palestine faces many challenges in these times, mainly because of the Israeli occupation, climate change, rapid urbanisation and pollution. To date, Israeli settlers have uprooted 7,000 olive trees and confiscated full olive bags from Palestinian villagers as they seek to intimidate them in order to drive them away from the land and to be able to repossess it.

Likewise, Palestinian culture is steeped in poems, songs, paintings, pottery and other forms of art dedicated to the olive harvest. There is also a strong link between Palestinian cuisine, olives, and olive oil. The deceased Palestinian poet Mahmoud Darwish wrote some Arabic poems about the olive tree.

The olive tree does not weep and does not laugh. The olive tree
Is the hillside’s, modest lady. Shadow Covers her single leg,
and she will not take her leaves off in front of the storm.
Standing, she is seated, and seated, standing.
She lives as a friendly sister of eternity, a neighbour of time.
That helps her stock her luminous oil and
Forget the invaders’ names, except the Romans, who
Coexisted with her, and borrowed some of her branches
To weave wreaths. They did not treat her
as a prisoner of war. But as a venerable grandmother, before whose calm dignity
Swords shatter. In her reticent silver-green
Colour hesitates to say what it thinks and to look at what is behind the portrait, of the olive tree, is neither green nor silver
The olive tree is the colour of peace, if peace needed
A colour. No one says to the olive tree: How beautiful you are!
But: How noble and how splendid! And she,
She who teaches soldiers to lay down their rifles
And re-educates them in tenderness and humility: Go home
And light your lamps with my oil! But
These soldiers, these modern soldiers

Besiege her with bulldozers and uproot her from her lineage of earth. They vanquished our grandmother who foundered, her branches are on the ground, her roots in the sky. She did not weep or cry out.  But one of her grandsons. Who witnessed the execution threw a stone at a soldier, and he was martyred with her. After the victorious soldiers had gone on their way, we buried him there, in that deep  pit – the grandmother’s cradle. And that is why we were sure that he would become, in a little while, an olive tree – a thorny olive tree – and green!

In Gaza, some people use the expression "the cross has materialised" to announce the beginning of the olive harvest. The expression has its roots in the oral history of the city, where conversions to Christianity occurred after the worship of stars and fire in the past.

According to legend, a priest came to Gaza and urged people to convert to Christianity after all Palestinian cities except Gaza had converted. He told the locals that they would be saved from drought and that it would rain if they did so. The people of Gaza, who were always rebellious in the story, refused to convert unless the priest prayed to God to make it rain. According to the story, the priest prayed and it rained, whereupon the people converted and used the expression "the cross had materialised" to express that the priest's promise had come true.