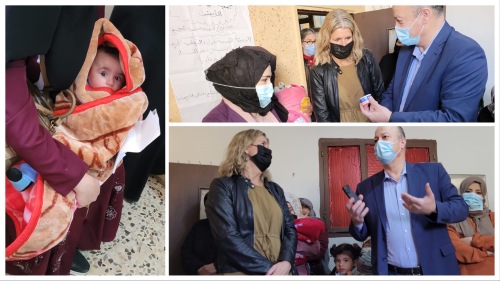 „Truly, I tell you, whatever you did for one of the least of these brothers and sister of min, you did for me.“ Matthew 25, 40.

Outreach to others is affirmation of our love; more so when it is directed to “the least of these brothers and sisters.” We are all created in God’s image and our faith teaches us to recognize the disadvantaged, the poorest and the dispossessed as they reflect in their dire circumstances the Godly image and seek the abundant life promised to us. One place where DSPR/MECC helps people and is active is Madaba Refugee Camp in Jordan, southwest of Amman. It is the smallest Palestinian refugee camp in Jordan, with a population of 10,500. It is not administered by UNRWA and is therefore not counted as an official refugee camp. Founded in 1956 as a Palestinian refugee camp, it is now also home to many Syrian refugees. DSPR Jordan, board members, staff and volunteers had the pleasure to welcome Ms. Jessica Lindberg Dik, the regional representative of Act Church of Sweden at the DSPR clinic at Madaba camp. Sami Khoury, Program Manager at DSPR Central Office accompanied DSPR Jordan and Jessica on this visit. The visit coincided with DSPR’s open medical day at the refugee camp. This special event at the camp gives the opportunity for anyone in the community with special medical needs to receive a subsidized medical service, medicines and supplements.


In the first hour of the open day event, at least 60 Palestinian, Syrian refugees, Jordanian women and children from the camp and surrounding localities were received at the clinic. They were able to receive medical services and medical supplements and vitamins. Following a doctor’s visit they all also listened to a special awareness lecture on respiratory infections in the households- as part of their COVID19 awareness campaign. Mothers of newborn babies also received “a baby kit” containing a package of diapers, among other hygienic and needed items for baby’s care.

Amal, the health coordinator at the clinic said; “we were happy to be able to reach out to our Madaba Camp and surrounding population through this event despite our small clinic; the turnout of people was a bit more than what we expected which shows that the need is big. We are very happy to have our health volunteers play a critical role in organizing, implementing and lecturing to our women”.

Throughout the morning, doctors at the clinic, a pediatrician and a woman gynecologist provided care for women and children. The children’s cases ranged from simple cold symptoms to more complex cases of chronic anemia, hearing issues and the need for referrals such as in cases of autism. One of the youngest babies who visited the clinic on the open day was Kawthar, a 12-month-old baby who was known to the camp’s medical team since her birth, when she was diagnosed with chronic anemia and needed regular growth monitoring. She also needs special milk that fits her anemia case. She was accompanied by her mother Ruqaya (mother of seven) who learned about the open medical day on the camp’s WhatsApp group. Kawthar was initially referred to a pediatrician who recommended more specialized care that would procure the special milk needed for her proper growth. Touching base with the camp’s medical team, on this open medical day, is affirmation of Kawthar’s mother sense of community that is created by the work of DSPR Jordan in the Madaba camp.

By the end of the open day, a total of 357 women and children were reached in this special event with more than 100 newborn kits provided, medicine and supplements kits distributed to beneficiaries. All women who came to the clinic had the opportunity to be part of the special lecture on respiratory infections.

The open day is part of “The Right to Health: ensuring maternal, new-born and child health care in Madaba Refugee Camp – Jordan” project; in partnership between DSPR Jordan and Act Church of Sweden and supported through the generous contribution of the Radio Aid- Sweden.