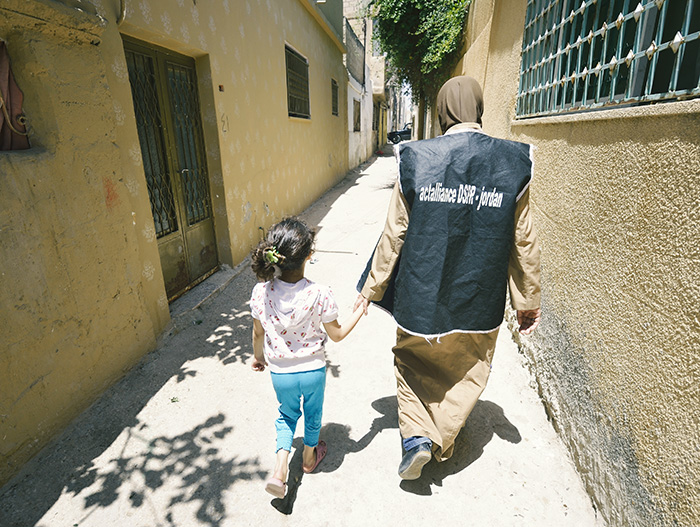 Sharifah lives in Madaba camp with her husband and children. Her husband suffers from health problems mainly related to hypertension, diabetes, and kidney problems. Sharifah is the breadwinner for her family and works in producing homemade food at Madaba camp. She receives daily wage that is barely enough for her daily basic and family needs. Sharifa also struggled with her health and her children’s health mainly with malnutrition and anemia. “I had such a hard time knowing what to do with my children. I went to the
DSPR Madaba clinic to get the needed care”. Few months later, Sharifa was invited by the
DSPR Jordan volunteers to participate in an awareness and counselling project. She learned how to help her own family as well as those who were in her community. As a result, when Sharifa was invited to become an active part of the health committee, she did not hesitate. She wanted to put in practice what she had learned and decided to join the committee that was formulated by DSPR as one of way to reach out the people who are not able to come to the clinic.

“It is amazing to see how Sharifa’s transformation” said Dr. Nickolita, DSPR’s health clinic director. I watched her participate in these sessions with so much passion. I was very pleased that she did agree to be part of the committee because that’s where she felt she could give back to the community”. Her personality completely changed, how to deal with her children health increased, and eventually she managed to generate more income for her family through conducting various workshops. “I am much stronger today because of the health program that I attended. Not only did my children’s health improved but I am able to stand up among women and tell them about how important nutrition is for them and for the children”; concluded Sharifa.